lord of the meringues 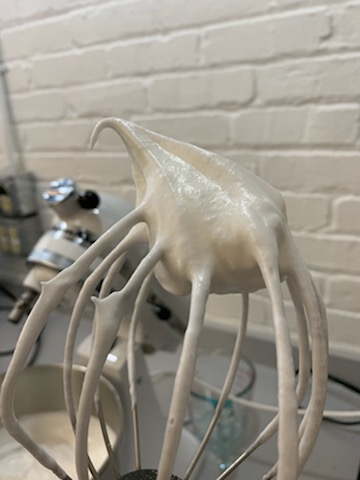 Today’s recipe deals primarily with the different chemical properties of eggs. We made meringa con zabaglione, or meringue tarts with custard and berries in English.

The first step for us, and the first step in making pretty much any meringue, was to separate the egg whites from the yolks and create an egg foam. So we used the stand mixer to beat the whites until we formed soft peaks. At this point, we probably slightly overbeat the eggs, but oh well – once we added the sugar syrup, they came out totally fine, and we were able to achieve stiff and glossy peaks.

After whipping our egg whites, we shaped them into our tart shells and put them in the oven to bake.

While our tarts baked (and also stood in the oven to dry after), we began to work on the zabaglione custard. Zabaglione also features egg as the main ingredient, but the yolks are used instead of the whites – in fact, we used the yolks we separated from the whites earlier in the recipe.

To make the zabaglione, we heated a mixture of the yolks, sugar, and wine in a glass bowl over a saucepan of simmering water. For 30 minutes, we whisked this mixture until it thickened to the consistency of custard.

Finally, we assembled the tarts, topped them with berries, and voila!

Applying heat to egg protein causes it to coagulate, making it thicker and insoluble in water.

The application of too much heat to the egg mixture in too short a time period causes it to coagulate too quickly. Instead of becoming a smooth custard, slowly, at a low temperature, and over a longer period of time, it cooks to the consistency of scrambled eggs instead. This is why we used a steam bath in the process of cooking the zabaglione, in order to slow the reaction time and prevent the eggs from scrambling.

And here we are talking about the results of our merenge:

Author: admin
Filed Under: Uncategorized
if you can’t take the heat… bruschetta the kitchen
Sformati (Analyze a Recipe #2)

3 thoughts on “lord of the meringues”