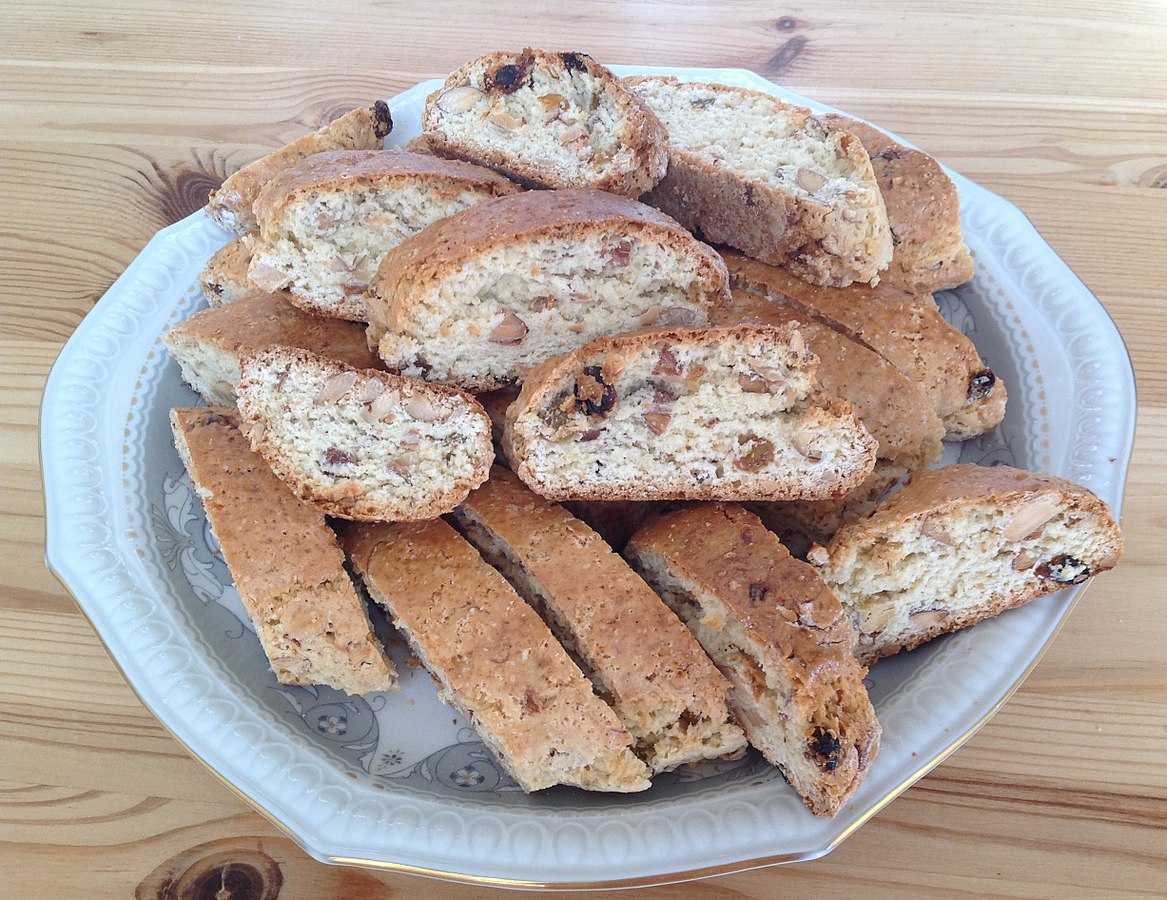 Biscotti, to me, has always been something that you get in cafés and coffee shops alongside your hot drink, because it’s usually the cheapest thing to eat on the menu. It’s one of my favorite baked goods, but I’ll admit that, for a long time, I’ve known very little about its origins or its chemical makeup. I’ve known that the name comes from the Latin for “twice baked,” as that’s how the cookie is prepared, and that it typically contains nuts and fillings such as almonds and chocolate pieces. After that, I did not know much at all about its origins in Italian history, or what ingredients aside from flour are necessary in the making of biscotti. I also did not know that the cookie is traditionally dipped in wine rather than hot coffee.

Biscotti is the plural form of the word biscotto, meaning “twice-cooked,” and it shares its origins with the word biscuit. The central ingredients of biscotti are flour, sugar, baking powder (in modern biscotti recipes – historically, ammonia was commonly used as a chemical leavening agent), eggs and salt. It also often includes fillings and flavorings such as nuts and chocolate, and is sometimes dipped in melted chocolate as well.

For the chemical analysis of this dish, I will be referring to the instructions set out in the Kitchen Chemistry Unit 1 Recipe Booklet recipe for biscotti ai due sapori (cranberry and pistachio biscotti). This recipe makes use of all-purpose flour as a central ingredient, alongside sugar, baking powder, sea salt and eggs. Although biscotti is a dense, solid baked good, leavening is still required to keep the cookies from becoming flat and inedible.

When making biscotti, you’re not aiming for a chewy texture, or a well-risen loaf of dough full of trapped air, like in breadmaking. Biscotti should be dense and dry, so it’s not necessary to form lots of gluten or to use a powerful leavening agent such as yeast. However, gluten formation and leavening are still important to prevent the biscotti from going completely flat, or simply crumbling into dust. Thus, all-purpose flour (which has a medium protein content) is kneaded together with eggs. It’s worked until the dough stops being crumbly and starts to come together in a solid mass, indicating the formation of gluten. Baking powder, a chemical leavening agent, gives the dough a slight rise so it becomes a loaf that can be sliced before the cookies are baked again. Heat then causes the liquid ingredients in the dough to evaporate, so double-baking the biscotti makes it extra dry, perfect for dipping in a beverage.

We haven’t talked much about the history of biscotti in the Eatalians section, but we have spoken plenty about flour and its significance in Italian culture. At the turn of the 19th century, Italy was a country marked by widespread hunger, and shaped by the availability of flour. The ability to afford goods baked with flour (bread in particular, but including biscotti as well) was a matter of life and death, as discussed in readings such as Black Bread and Ruin.

Additionally, regionality and locality are central facets of Italian cuisine. The landscape of Italy is pocked with mountains and extremely varied regional climates that, historically, made travel and the spread of culinary ideas between regions difficult. Thus, the type of flour that was available in a singular region often influenced that region’s traditional fare. Regions such as Sicily were characterized by the production of durum, while rye was grown in Southern Tyrol, because it can tolerate the colder, alpine weather. Biscotti is a Tuscan dish – Tuscany, which resides in Central Italy, is characterized by a mild climate and fertile plains, making it conducive to the cultivation of wheat.

I also did some of my own research into biscotti as an individual dish. In ancient Rome, biscotti was a staple food eaten by soldiers and travelers, because it was perfect for transport – it would not stale, as it already had been staled in the oven when baked a second time. The dish re-emerged in Tuscany during the Renaissance, when it was deemed the perfect baked good to soak up the local Vin Santo due to its crunchy texture and mild flavor.

While Jewish and Italian cuisine intersect in many ways, and Jewish-Italian communities (including, but not limited to, the Italkim) have been prevalent in Italy since the Roman times, the Jewish cookie mandelbrot is not closely related to the Italian biscotti. Instead, mandelbrot has origins in Eastern European Ashkenazi communities. It is similar in texture but softer than biscotti due to its higher oil content and the inclusion of butter. However, it’s interesting that similar dishes are often developed concurrently by different groups of people in different places, using different sets of ingredients available to them.

It is often said that necessity is the mother of invention, and I find that this holds true for nothing so much as it does for food. Not only are regional cuisines defined by the resources available within a specific region, individual dishes are also often invented to serve a certain function or fulfill a particular need. This is especially the case for biscotti, which was purposely staled in the oven in order to make it last longer for soldiers and travelers, and which was shaped in its invention by the availability of wheat flour in Tuscany. In this way, chemistry is used as a tool to achieve what is necessary, and to further the goals of culinary invention. For biscotti, this occurs through the use of chemical leavening to keep the biscuit edible in spite of its texture, the formation of gluten via wheat flour to bind the biscuit, and the application of heat to dry out and preserve the biscotti. Biscotti is thus an exemplary demonstration of the intersection between cultural history and chemistry in food.

Author: admin
Filed Under: Uncategorized
break me off a pitta that ‘mpigliata
if you can’t take the heat… bruschetta the kitchen