I dream of grissini… 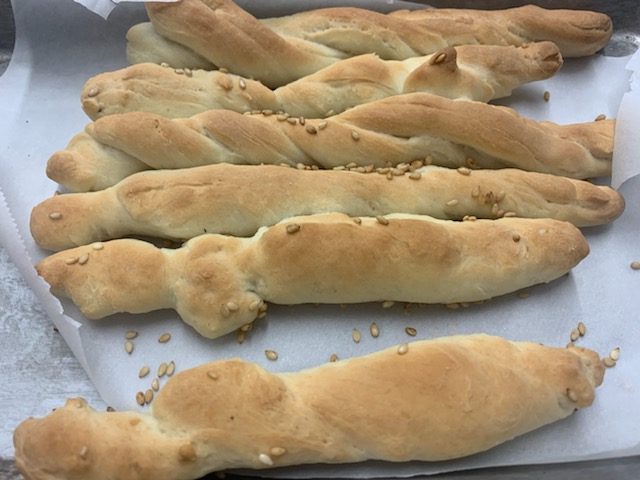 This post is going to be less about breadsticks and more about flour, types of flour, and how flour operates in baking – but I do want to show off our little ball of unrisen dough first. Isn’t it cute?

Before this little guy got to where he is in this photo, he was (you guessed it) just a tiny pile of flour. To make our grissini, we began by measuring our dry ingredients: flour, of course, in addition to salt and yeast.

We were assigned to use partial amounts of cake flour in our grissini dough, as opposed to other groups who used whole wheat flour, bread flour, all-purpose flour, etc. After this, the process of making the breadsticks was relatively simple. To these dry ingredients, we added the wet ingredients – water, oil, honey – and combined them in the food processor until they formed a dough. Then we coated the dough in more olive oil and put it in a bowl to rise, as the first photo in this post shows.

While our dough was rising, we also experimented with the cake flour and some water to create another, smaller “dough.” However, our concoction came out much more like a batter. This is most likely because cake flour is low in protein when compared to other baking flours, which is ideal for use in cakes due to the texture this characteristic provides – light and soft. The low protein content means that cake flour when combined with water hardly forms any gluten at all, which is what gives bread dough its shape and bread its chewy texture.

Once the dough finished rising to twice its size, we rolled it out into a rectangle. The dough was tough to handle, but we did not struggle with it as much as some of the other groups, presumably because the cake flour made our dough less tough. After this, we shaped our breadsticks, pressing strips of dough in sesame seeds and twisting them to create a spiral pattern. Then we let them rest for about 15 minutes to puff up, after which they went in the oven to bake!

After about 12 minutes, our grissini came out golden brown and done. We were quite surprised with the results: not only were they much softer than we initially expected (before we conducted the experiment with the cake flour, that is), but they really puffed up in the oven. Nevertheless, they were delicious, just very soft. The all-purpose flour breadsticks were similarly soft, whereas the bread flour breadsticks were properly crunchy.

Finally, here’s a video of my lab partner and I trying our first recipe, our freshly-baked grissini! We even break it for you to show the texture the cake flour has given them.

Thanks for reading! Next time, we’ll be trying something more ambitious – ciabatta.

1 thought on “I dream of grissini…”